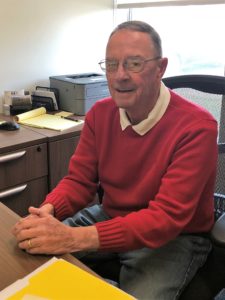 “Being part of NNDHP has given me an opportunity to give back to the community.”

Before embarking on his 46-year law career, Vice President of NNDHP Advisory Board of Directors, David Russell, Esq. served for two years as First Lieutenant in the U.S. Army where he was awarded with the Meritorious Service Medal.

Russell’s praiseworthy conduct didn’t stop with the Army. For 30 years and counting, he has looked out for at-risk children and veterans in his community as a board member of Northern Nevada Dental Health Programs.

“Dr. Joel Glover put me on the NNDHP Board more than 30 years ago and the experience of working with the Northern Nevada Dental Society’s non-profit arm to serve needy children and now also at-risk veterans, has been very rewarding, to say the least,” said Russell.

Now Vice President of the NNDHP Board, Russell continues to feel energized by and enthusiastic about everything the non-profit does through its Healthy Smile Healthy Child and Adopt a Vet Dental Programs to provide no-cost to low-cost dental care to children and veterans in need.

“NNDHP has, and continues to do a tremendous job, as do all its volunteer dental providers,” said Russell.

Russell is currently a staff attorney working with senior issues at the non-profit Washoe Legal Services and also serves as Trustee for the Robert Z. Hawkins Foundation. He is a past chairman for the State Bar Fee Dispute committee and the University of Nevada, Reno’s Legislative Steering Committee. He is past president of Mavericks Civic Group, Western Industrial Nevada, and the University of Nevada’s Alumni Council, and also a past member of the Economic Development Authority of Western Nevada.

Russell holds a Juris Doctorate from Georgetown University Law Center and has been recognized numerous times by Best Lawyers in America for Corporate Law. He has also received University and Alumni Service Awards from the University of Nevada, Reno, where he completed his undergraduate studies.

When Russell is not working or giving back to his community, he can be found cooking up a storm at home, being entertained by books fiction and lovingly watching his grandkids after school.