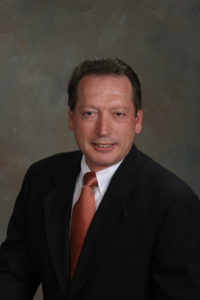 “This is a one-of-a-kind program that could, and should, serve as a model for other areas.”

Robert (Bob) Barone has served as treasurer on the Advisory Board of Directors for Northern Nevada Dental Health Programs (NNDHP) for nineteen years. An investment advisor at Four Star Wealth Management, Barone brings 40+ years of experience in academia, banking and finance to the non-profit.

A visionary and longtime supporter of the life changing charitable work he has seen northern Nevada dentists execute through NNDHP, the non-profit arm of the Northern Nevada Dental Society, over the years, Barone believes other cities could benefit from taking a page from NNDHP’s book.

“Anywhere there is a large population, there are dentists,” said Barone. “The dental community in northern Nevada has shown that they are willing to treat underserved populations pro-bono and I can’t imagine any other dental community that wouldn’t want to do this too. The trouble is, it takes a lot of structure to facilitate such charitable work, which many communities may not have. This is where NNDHP easily serves as a model program for other communities.”

Through Barone’s hope for other communities to look to NNDHP for inspiration, he sees additional non-profits and endeavors igniting to help form the smiles of children who don’t have dental insurance and save the smiles of local American veterans who have no other access to dental health.

A wearer of many hats, Barone’s non-profit support doesn’t stop with NNDHP. He is also a Board member of The Glover Foundation, a charity that provides college scholarships to local high school students. Additionally, he is a director of AAA Northern California, Nevada, and Utah and was chairman of the auto club’s board from 2007 to 2009.  He is also director of CSAA Insurance Company and serves as chairman of the company’s board’s Finance and Investment Committee, and is a director of Allied Mineral Products, Columbus, OH, a major international supplier of refractory products to the world’s metal melting industries. He also served as a director of the Federal Home Loan Bank of San Francisco from 1996 to 2004, performing as chairman of the bank’s board during 2004.

Barone received a bachelor’s degree and Ph.D. in economics from Georgetown University in Washington D.C.

When Barone is not busy working and giving back, he loves spending his time cooking (especially Italian dishes and pizza). He occasionally plays golf, goes to the movies and tries to travel to exotic destinations at least once a year.